What is the protonation state?

A key idea to consider with any acid/base conjugate pair is the "protonation state" at a given pH.

Ammonia, NH3 is a base and its conjugate acid is the ammonium ion, NH4+. These are essentially two forms of the same compound. One that is deprotonated, the ammonia. One that is protonated, the ammonium. If this compound is found in solution at a particular pH it is important to know which concentration will be larger. This can be deduced by examining the equilibrium constant. As both the protonated form and deprotonated form are in the equilibrium express Ka and Kb either could be used to examine the relationship. We will look at Ka. For the NH3/NH4+ pair Ka is

Ka has a fixed value. For NH4+ it is 5.56 x 10-10. What is important is that it is a constant. We are interested in the ratio of the deprotonated form to the protonated form ([NH3]/[NH4+]. We are considering a solution with a given pH, which means that the [H3O+] is known. Since the product of the [H3O+] and the ratio [NH3]/[NH4+] is a constant, the larger the [H3O+] the smaller the ratio. This means the [H3O+] increases as the amount of the protonated form increases relative to the deprotonated form. We could have easily determined this from the application of LeChatelier's Principle. Since we know Ka we can determine this relationship quantitatively. Taking the log of both sides of the equilibrium expression yields

Multiply through by a negative sign (and inverting the logarithm) yields.

This has many implications for chemistry in aqueous solutions (especially for biochemistry). Interactions of molecules and solubility are greatly affected by their charge state. As we protonate or deprotonate compounds their charges, interactions, and solubility will all be changing. The solubility of drug compounds can change dramatically as the pH changes as charged compounds tend to stay in solution (blood) while neutral molecules are absorbed into tissue. This can affect how they are taken up by different regions of the body. Or dramatic difference in drug compounds given orally vs intravenously since stomach acid is dramatically more acidic than blood. Similarly, the structure of proteins can be altered by changing the protonation state of amino-acid residues. As a consequence, the pH in biochemical systems is carefully buffered to be maintained at particular values as fluctuations in pH would have large consequences on protein structure and function.

The pKa for acetic acid is 4.75. In a solution with a pH = 8, which will have the highest concentration?
(mouse over choices to get answer)

Polyprotic acids are acids with more than one acidic proton.  There is a specific equilibrium for each proton coming off of the acid.  The equilibrium constants for these protons are ranked by strength. Often the strengths of each proton are well separated, but for many compounds there are multiple protons with very similar equilibrium states.

The equilibria for polyprotic acids are very simply when they are put into water (with nothing else). In this case, only one proton (the one with the largest Ka dissociates to any large extent. These can then be treated essentially as weak acids with only one proton. The other protons in compound will generally all be essentially 100% in their protonated state. For example, if you place H3PO4 into water, it will dissociate and form H3O+ and H2PO4- to a small extent since the Ka for this first proton is 7.1 x 10-3. However, in this solution you will have essentially no HPO42- or PO43- as the next two protons are so weakly acidic that they will never dissociate in this solution. The only way to "pull" them off the molecule would be to neutralize the first proton by adding a strong base to the solution.

A special polyprotic acid is sulfuric acid. The first proton has a larger enough equilibrium constant to be considered strong, and the second proton is weak (but with a fairly large Ka). Most of the approximate formulas we developed for acids solutions fail for sulfuric acid for these reasons. 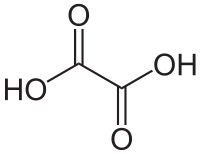 This has two carboxylic acid groups (COOH).  This compound could be written as (COOH)2.  As a consequence, it has two acidic protons.  The pKa for these two are

Examining the compound in aqueous solutions of different pH, it is possible to determine whether 1 or 2 protons would be "on" or "off" the molecule under different conditions.

First imagine the compound is in a solution that has a pH = 10.  That is rather basic.  The question is, "is pH=10 basic compared to the pKa's of the protons".  This can be determined by comparing the pH and pKa's.   In this case the pH is more basic than both the pKa's (pH > pKa). Therefore both protons will "deprotonated".   The solution would have the majority of the compound in the fully deprotonated form (COO-)2.   If instead the solution was very acidic situation pH = 0, then comparing the pH to the pKa's, the solution is more acidic than both the pKa's (pH < pKa) and both protons would be "on" the molecule.   The predominate form in solution would be the fully protonated (COOH)2.   Finally, consider a pH that is between the two pKa's.   At a pH = 2.5, one proton would be "off" since this is more basic than the first pKa (that proton would be deprotonated), but it is more acidic than the second pKa (that proton would be protonated).   The predominate molecular form would be the singly protonated (COO)-(COOH).

What about other pH values?  What if the pH was equal to pKa2?  Then we would expect to find the first proton completely off (as the pH is more basic than the first pKa), but the second proton would be at a pH where we would find it half protonated and half deprotonated.