The Arrhenius theory and reaction coordinates relate to a particular perspective on chemical kinetics that imagines the path taken by the reactants as they are converted to the products.  This change is not instantaneous and is typically slowed by the fact that in order to convert from reactants to products, the system must first pass through a higher energy state known as the transition state.  The size of the energy barrier controls the temperature dependence of the rate constant.

At any given temperature there is a distribution of energies for the molecules in the system. Some small fraction have enough energy to get over this barrier. The reaction rate then depends on the number of molecules that have sufficient energy. To speed up the rate, one can either raise the temperature or one can or lower the barrier. As a result, essentially all chemical reaction increase in rate as the temperature is increased. This is the idea that is the basis for the Arrhenius Law. However, this has its limits in the real world since maintaining a system at high temperatures requires energy. In addition, as the temperature increase there may be undesired outcomes such as decomposition of some of the reactants or products. From a practical stand point to speed up a reaction you would like to lower the barrier. This is what is done by a "catalyst" for a given reaction.

Right in the middle of the breaking of the old bond and forming of the new bond, the system exists in what we call a "transition state" that is higher in energy than either the reactants or the products.  Once it gets beyond this state, it proceeds along the reaction coordinate to form the products.

The reaction above has three steps (three barriers) and two intermediates.  On the far left of the diagram are the reactant species and on the far right are the product species.

The rate of a reaction depends on the height of the barrier (the activation energy) because only a small fraction of the number of molecules at a given temperature have sufficient energy to get over the barrier.  At a given temperature, there is a distribution of kinetic energies for all the molecules in a sample (this is the Boltzmann distribution).  This molecular kinetic energy can describe things like vibrations of molecules even for samples like solids that might not be "moving".

Where k is the rate constant, Ea is the activation energy,  R is the gas constant, A is a constant called the pre-exponential factor, and T is the temperature.  This formula is essentially a comparison between the energy of the molecules (RT) and the energy of the barrier (Ea).  The pre-exponential factor is a constant that is specific to the reaction and it is essentially the ultimate rate of the reaction.  This is the fastest the reaction could ever proceed (if the barrier were zero or the temperature were infinite).

This leads to a very general conclusion.   A barrier exists for most all chemical reactions.  Therefore as the temperature increases, the rate of all reactions increase.  This has little to do with the molecules moving faster and colliding more often.  It has everything to do with the molecules having more energy and making it over the barrier along the reaction coordinate.

Raise the temperature and the reaction will go faster.  Why?  The rate constant is larger at higher temperatures.

The Arrhenius equation is often used to compare the rate constants measured at two different temperatures.  Using two sets of data points, the equation can be rearranged to yield

This equation can also be written as

Therefore if one measures rate constants at many temperatures and constructs a plot of lnk vs 1/T the slope of the plot will be -Ea/R and the intercept will be lnA. 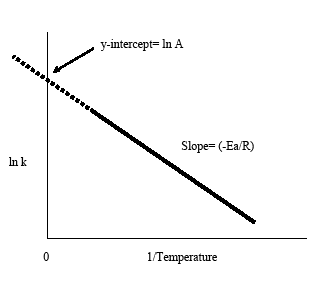 This leads to a very general conclusion.   A barrier exists for most all chemical reactions.  Therefore as the temperature increases, the rate of all reactions increase.  This has little to do with the molecules moving faster and colliding more often.  It has everything to do with the molecules having more energy and making it over the barrier along the reaction coordinate.

Raise the temperature and the reaction will go faster.  Why?  The rate constant is larger at higher temperatures.

We can relate our reaction coordinate picture to the chemical mechanism.

For example, the following picture illustrates a mechanism that occurs in three steps and forms two intermediates at points B and C (A is reactants and D is products).  Note: Each letter does not literally have to be a single chemical species, instead point B is all the intermediate chemical species that exist after the first step. 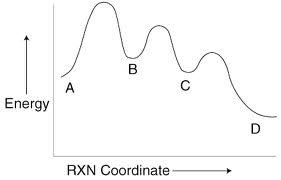 Writing out this mechanism we would have